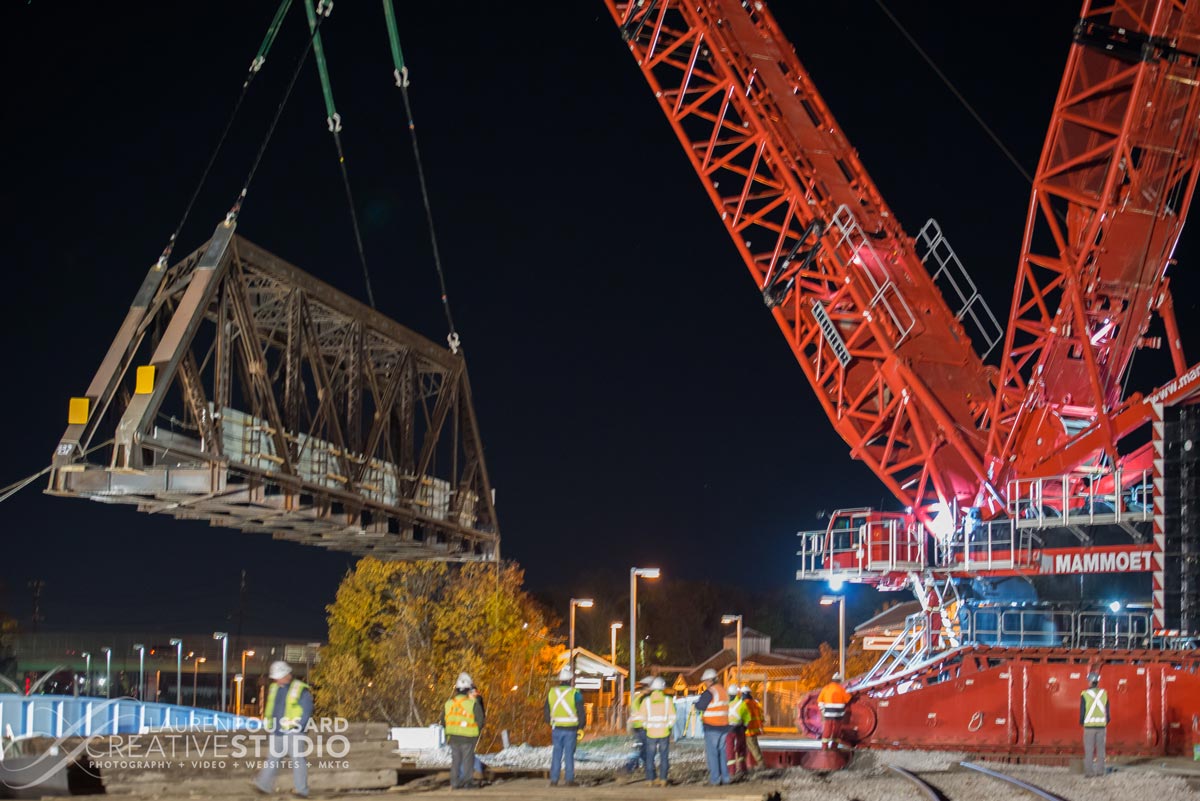 One of the coolest things about being a photographer is being asked to capture special moments in time. Those moments are so varied – births, weddings, special occasions, beautiful places on earth, special moments in history, you name it.  It’s really neat to “be there” for them, no matter what they are.

We were recently asked to document the removal of an old train bridge and the installation of a new one at the Readville MBTA train station in Hyde Park for our friends over at Barletta Construction.  That may not sound terribly exciting to some, but the geek in me had a blast.

The jobs were scheduled to start at 11pm and possibly last until 5am over the course of a raw November weekend.  What was particularly cool, was that the bridges were being lifted in ONE piece – not completely dismantled and rebuilt as one might expect.  That’s because this train bridge passes over another very active railway line, so there’s no way to get equipment in place to do the work, and, there’s the added issue of any debris on the lower line could prove to be dangerous to the trains using it.  Interesting challenge.  In order to meet that challenge, Barletta brought in Dutch crane company Mammoet who’s enormous cranes can move hundreds of thousands of tons and in tight spaces.  The crane was shipped over in (I can’t remember the specific number) something like 33 trucks and assembled in place.  It was so large, I could barely fit it in the camera frame.

I installed a second camera on one of the rail lines to capture time lapse images and walked around taking photos and small video snippets of the work as it went along.  I got to meet many of the engineers and PMs who were anxious to see all of their work finally come together.  One gentleman I spoke to worked for the firm who engineered the hooks that the crane would attach to to lift the bridges.  You can’t imagine how much engineering went into the hooks. (I made sure to get pictures of them for him.). We watched for a while as the guys tried to attach the crane to these hooks, they seemed to be struggling a little. Well, the hooks are over 200 pounds each, and the guys were suspended on ‘cherry picker’ style cranes, so it was no wonder it took some muscle to get it done.  But get the job done they did and we all watched – crowds of locals, train hobbyists, train spotters crowded the overpass bridge and nearby train platforms to have a look of the cool scene – an 1880’s bridge, being lifted and hauled by this mammoth (‘mammoet’) red crane.

A long, cold, tiring weekend for sure, but we captured some neat things and made this cool timelapse video.  I especially love that awkward pause as the old bridge looks precariously close to the lamp post! lol.